Every month, Foundation Advocate chooses one aspect of foundation investment performance to highlight.

This month we ask a very fundamental question, Who Should We Compare Ourselves To?

Before answering this seemingly straightforward question about performance, it might be useful to establish a quick framework to place performance into context.  Rather than lead with foundations, we thought a more familiar group, Ivy League endowments, would help illustrate some core concepts. 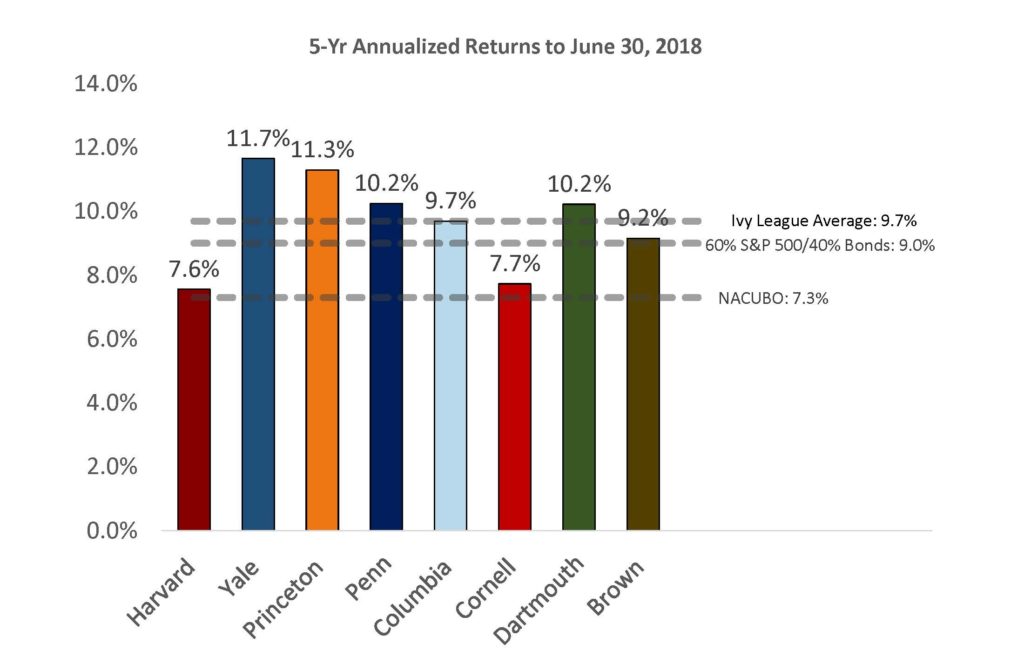 As the table above shows, Ivy League performance can be viewed in a variety of ways.

By offering multiple points of comparison, the chart offers a more complete view of Ivy League performance. If, for example a Dartmouth alum wanted to know how its endowment was doing, he could easily see that it outperformed the Ivy average, a passive mix as well as the average college.

Only with a fuller picture can the more interesting and useful questions be asked, like what can Harvard and Cornell do better?  (Harvard did a clean sweep of it’s investment team 2 years ago).

So What About Foundations?

The same concepts above hold true for foundations. A meaningful answer to “How are foundations doing?” can only be addressed by answering it in the context of public market indices, average foundation performance, and representative peers.

For example, below is a chart showing the estimated investment performance of a group of 8 of the largest foundations in the United States, the “Big-8”. (Note: unlike colleges which publicly disclose performance, foundations typically do not. The data below is provided by our parent company, Foundation Financial Research which publishes the  FoundationMark indices.)

Eight of the Largest US Foundations 5 Year Performance

Note: Very few foundations disclose their investment performance. Among the eight in the chart, only MacArthur does on a regular basis. MarArthur’s calculated 5-Year return was 8.34%, Foundation Financial Research’s estimate was 8.39%, a difference of 5 basis points. The chart uses the FFR estimate for consistency with the other foundations. Ford did disclose their investment performance in 2016 but we haven’t seen an update for 2017.

It is important to note that these returns shouldn’t be compared to the colleges as they cover time different periods. (Note the difference in the 60/40 mix in the two charts). Colleges use a June fiscal year. Foundations can choose any month for their fiscal year-end, but the eight in the chart use the December calendar year end. Since foundations don’t have school colors, we color coded this based simply on which foundations outperformed the average in the group, darker green outperformed while lighter under-performed the average.

Foundations: Compared to What?

In the same way we looked at endowment performance, we can look at these foundations from a several angles.

How Is Our Foundation Doing?

Knowing how foundations as a  group are doing is important, but it is far more important for trustees to know how their performance stacks up in absolute terms, relative to market indices, foundations overall, and peers.

Are You A Foundation?