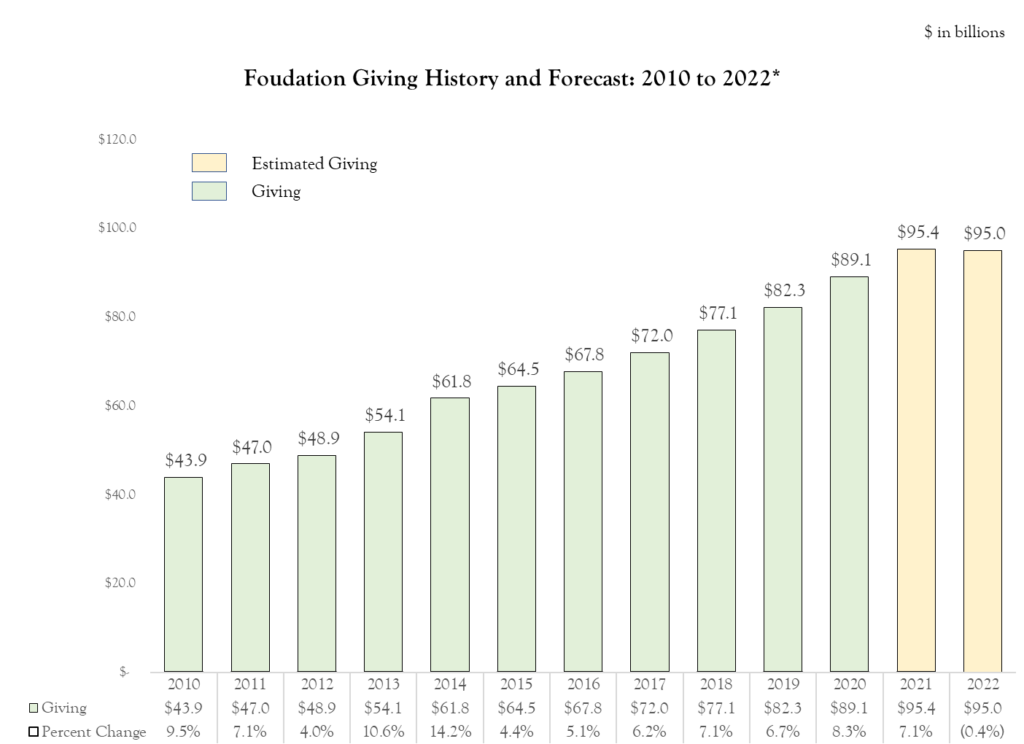 Giving Forecasted to be Down Slightly in 2022

Asset levels reached a record $1.3 trillion at the end of 2021 before falling to $1.05 trillion by December 2022.  This decrease caused the rolling three year asset level to drop to modestly to $1.17 trillion.

Based on the two important caveats regarding asset levels and payout ratios that we highlight, we expect foundation giving to fall slightly to $95 billion in 2022.

Giving amounts are based on two variables, 1) Asset Value, and 2) Payout Ratio.

*Annual giving levels shown above reflects total grants, gifts, and operating expenses as reported by private foundation in their 990-PF filings.  There is a time lag between foundations year-end and when their tax filings are released to the public.  Data for 2021 is preliminary and data for 2022 is forecasted based on the assumptions detailed below.

As you can see in the graph below, there is a very high correlation between asset levels (light blue line) and giving levels (green line).  Furthermore, one can see that while both assets and giving have shown significant growth over the period, asset levels tend to fluctuate more than giving levels, which is understandable as asset levels are subject to financial market moves.  One reason for the lower volatility of giving levels is that many large foundations (which also represent a large proportion of giving) use a three year rolling average of assets when budgeting their giving program.  The dotted line shows the three year average asset levels.  The correlation coefficient between the three year average and giving is over 99%.

While we won’t know for sure the level of 2022 foundation giving until well after foundations have closed their books for the year, filed their 990-PF forms, and the IRS releases the data, we believe that operating charities should expect giving from foundations to be lower in 2022 than in 2021.

Based on the formulas referenced above, foundation assets would need to grow about 12% to get the three year rolling average back to the current level.  This would require investment performance of over 15% based on out assumptions.