There is a core question in managing money that is very difficult to answer, which is How hard is our money working? One hears about taking “calculated risks” or the term “risk adjusted returns” when discussing investment results. Too often the underlying components necessary to evaluate risk aren’t disclosed, are difficult to understand, or aren’t even measured at all. So risk is ignored or seen as merely a judgement call.  Investors typically are presented with a return figure, and (in the case of poor returns) the assurance that the low return was the result of an abundance of caution.

Risk is an interesting concept. Everyone knows the term and its application in everyday life, whether it’s figuring out what time to leave for the airport or thinking about how fast you can drive without risking a ticket or worse. But when it comes to describing risk in investments, the conversation usually ends or becomes a Greek lesson in alpha, beta, gamma, sigma and such.

People also understand the inherent relationship between risk and reward, the notion that you need an incentive to take risk.

There is a good reason that risk isn’t discussed as much as performance.  Unlike returns, which are very much cut and dried, risk is very tough to describe.  People can’t even agree on how to define it, let alone find a universal way to measure it. Most would agree that investment risk can be thought of as the probability of a permanent loss of capital, but they don’t provide probabilities or odds on the floor of the stock exchange. So it is only after the fact that one can ascertain whether an investment worked out.  Risk might be understood in terms of a good outcome versus a bad outcome. One might hear someone say “I think this stock can double in the next year”, but if it is only a fifty-fifty bet (think of a coin flip) if it just as likely that the stock might get cut in half that year.

Since most investment probabilities are tough to measure, another concept of risk emerged based on fluctuations in value over time, called volatility.  Volatility has one great advantage over the probability of loss camp in that it is calculable.

Imagine a very simple horse race as shown in the table with 4 horses and their associated probabilities of winning.  By definition, the probability of losing is simply the the inverse of the probability of winning. Clearly Ever Ready is the lowest risk horse, winning (and losing) half the time, while Quattro wins 1 in 4, (losing 3 out 4), Quinto wins 1 in 5 (losing 4 out 5) and the long shot Blue Moon wins just 1 in 20 so has a 95% chance of losing any race.

At this track, there is no credit for coming in second, third or fourth.

If these 4 horses ran true to the odds in 20 races, the results would show that Ever Ready won 10 times, while Blue Moon just had one victory against 19 losses as shown in the chart. 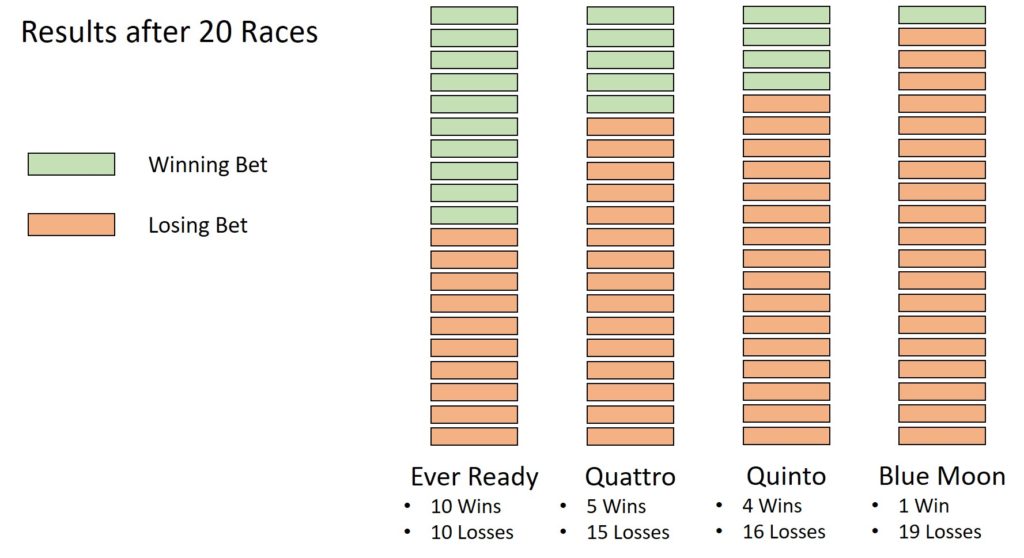 Of course no one would back a horse that had a 95% chance of losing (permanent loss of capital) unless there was an incentive, in racing this is the chance of a larger payout, more commonly called the odds.

Blue Moon has the highest likelihood of losing, but bettors are compensated by a payout that is 10 times higher than the favorite.

As they all have the same expected return, in theory, one should be indifferent to betting on any of the four horses in our experiment.  Rearranging the blocks from the “Results after 20 Races” graphic above one can see the emergence of a linear relationship between risk rewards in this example. 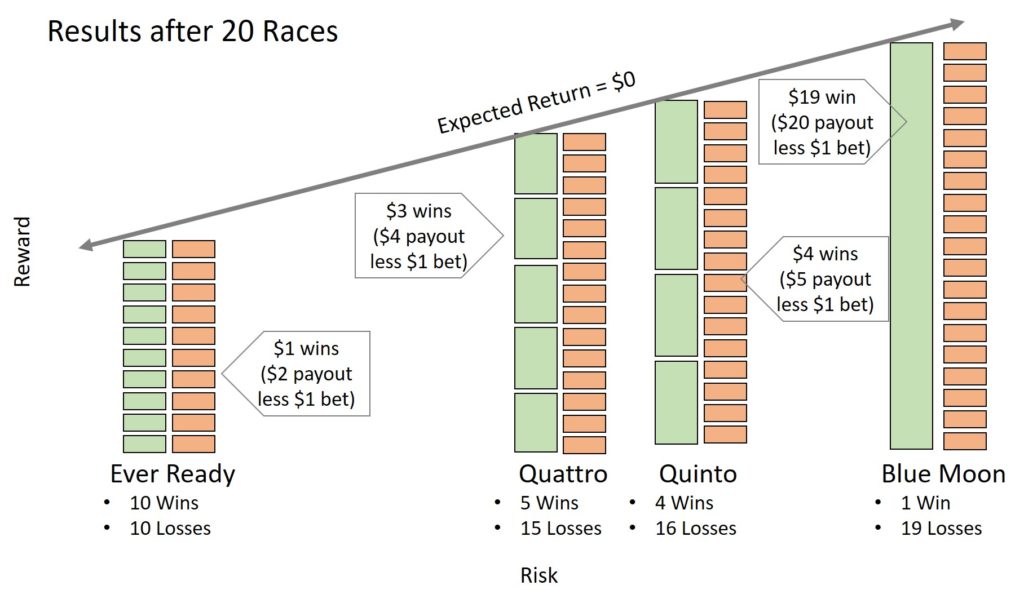 At this point, one may be satisfied that equal risk is assured since the probability of a good outcome (winning) versus a bad outcome (losing) adjusts by the different payout levels.  Further, it may seem contradictory to have different levels of risk associated with bets with the same expected return.  However, consider why the chart above rises to the right.  The rise is due to the fact that there is more capital at risk, and so must require a higher return to maintain the constant expected return of $0.  In this case the bettor had to put up $20 – 19 losing bets before his winning 20th bet to get back to even.  Of course, one could imagine a case in which the Blue Moon bettor won the first race and was “playing with the house’s money”, but let’s use this opportunity to return to the concept of volatility that we introduced above.  In simple terms, volatility can be thought of as a measure of the fluctuations of the value of an asset.  Big fluctuations in value means high volatility, while steadier values exhibit low volatility.

If we had 4 accounts each staked with $100 to bet on the same horse each time and ran the race 1,000 times, randomly assigning winners (in accordance with their odds) what would the results look like?

As one can see, all four accounts started with $100 and finished with $100 in accordance with the probability constraint, but the paths they took varied a good deal.  The top chart is probably too busy for most to see the effects of all four, so we would like to direct your attention to the bottom chart, which focuses on the two extremes.

The Ever Ready account barely varies between race one and race one thousand, while Blue Moon swings from a low of about $50 to a high of $160 before settling back to the the opening level of $100. 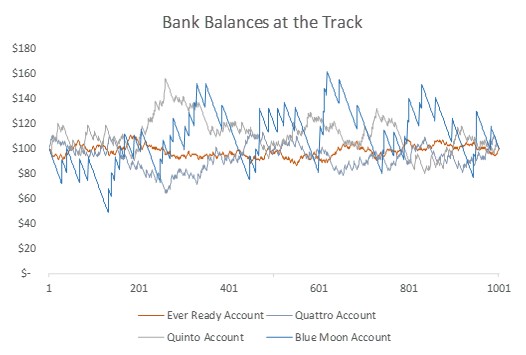 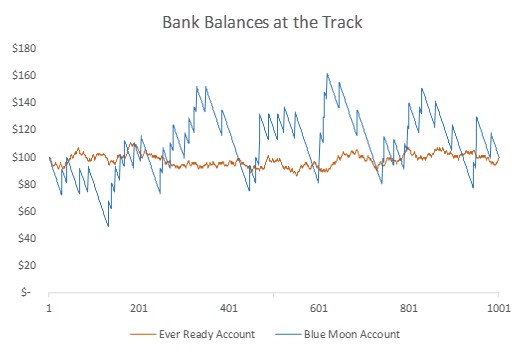 Returning to the question of describing risk, on the one hand, since both accounts started at $100 and ended at $100 in accordance with their win/lose probabilities, one could argue that they were about the same, while on the other hand, one can point to Blue Moon’s gyrations and conclude that its volatility made it a riskier holding.

What can investors, including foundations, learn from the track?

Some may seem very fundamental, and merely common sense, but we believe they are important building blocks and bear emphasizing.

At the risk of stating the obvious, it is important to have expectations for both return as well as risk.  One reason that a horse track can serve as fertile ground for demonstrating concepts is that they plainly lay out the two most factors in investing, which are risk and reward.

For the vast majority of investments, it is up to the investor to determine the chances and magnitude of success and failure.  As we discussed above, risk can be interpreted a number of ways –  as a loss of capital, a measure of volatility, a combination of the two, or other factors outside the purview of this article.

Yale University and its famed Chief Investment Officer, David Swensen, publish an annual investment report in which they lay out long term investment expectations as we have shown in the attached chart. 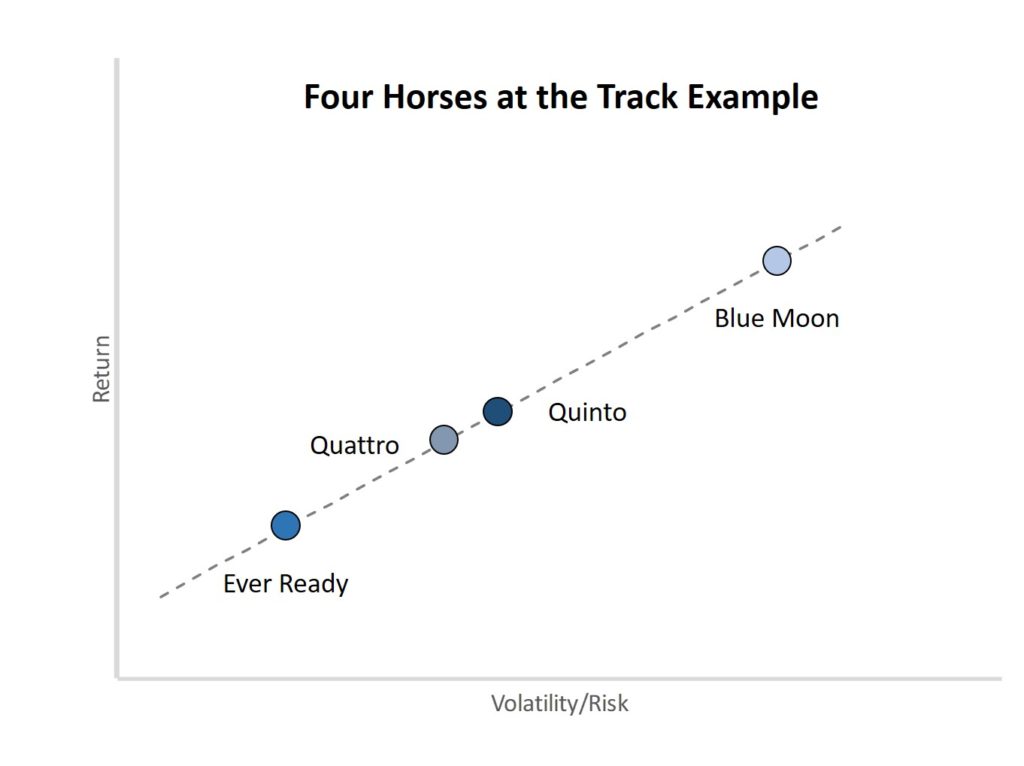 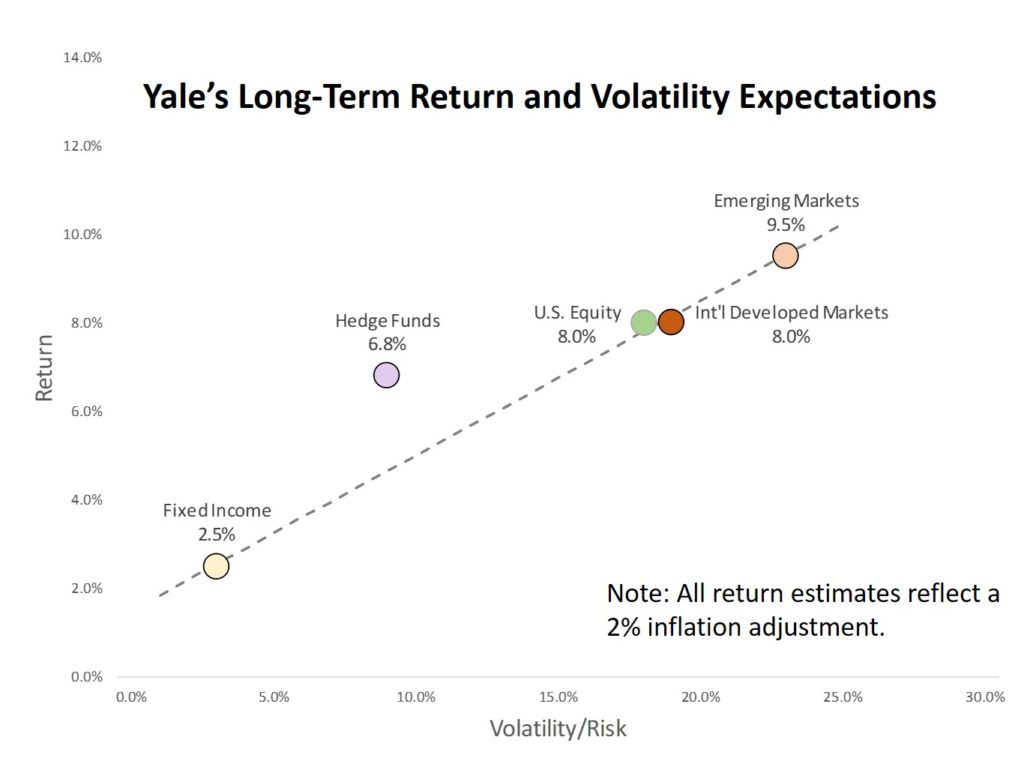 To see the source data or read more from the Yale investment report, please click here.

The lesson here is not that Yale’s numbers are right (though they do mention a couple of Nobel Prize winners whose work they use), but that it is important to go through the process of making estimates to 1) compare investments against one another and 2) see how their estimates compared with actual results.

In the case of horse racing, since you know the payout/return, you are betting that the odds are wrong and the probability of a good outcome outweighs the probability of a bad outcome. If for example you think that Blue Moon has a better than 1 in 20 chance of winning, it would make sense to bet.

Most investments don’t come with known payouts to calculate probabilities, you need to do that yourself, but it is important to weigh good outcomes in terms of both likelihood and magnitude against the probability of downside an potential loss. Investments with similar upside expectations, but better downside are lower risk and thus better investments. 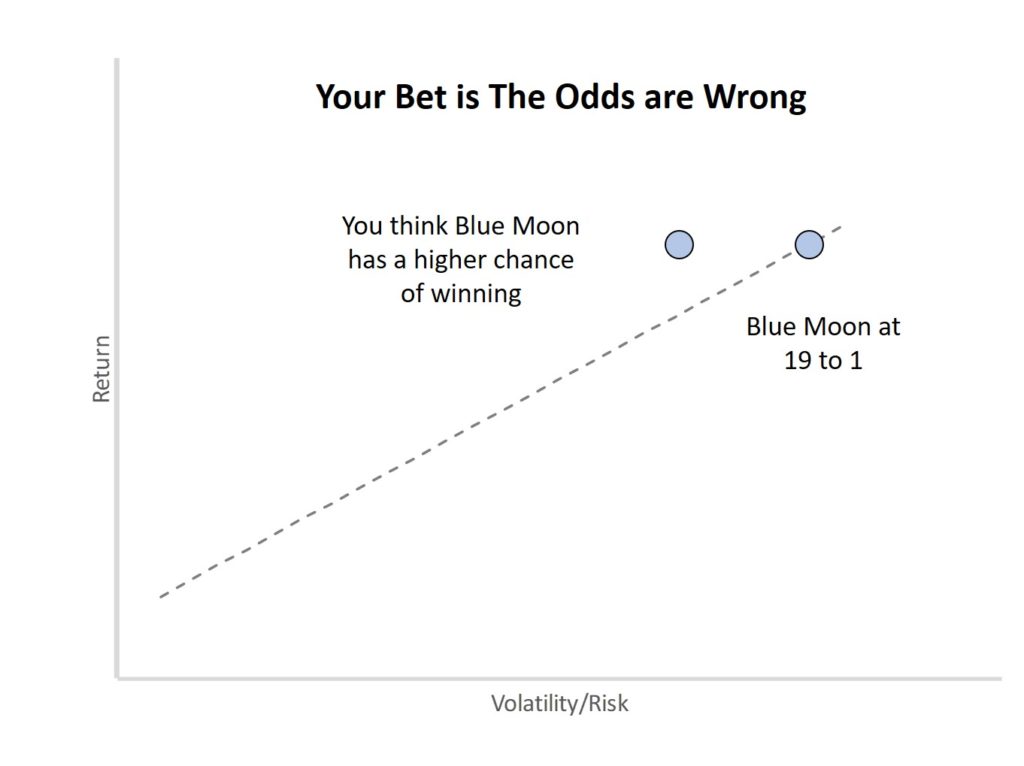 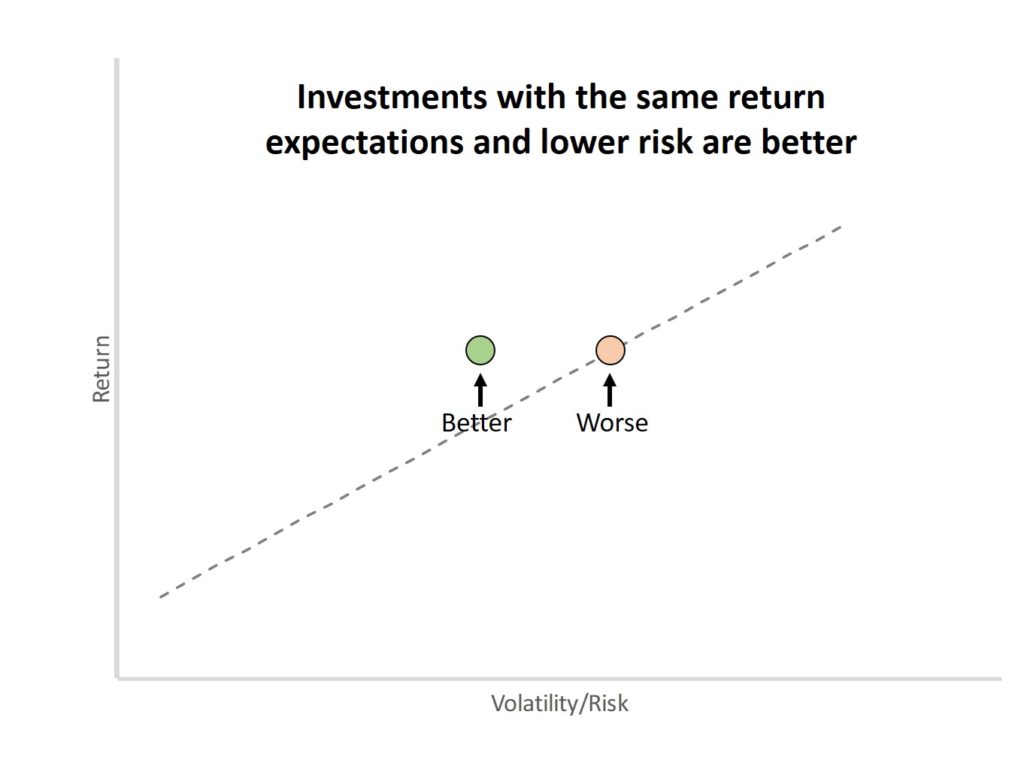 Look at Risk and Return from Several Points of View

In our simulation of 1,000 days at the races, we showed that simply evaluating risk as the probability of a permanent loss of capital didn’t tell the full story.   We saw that even with perfect visibility on long-term returns, there can still be factors that might make an investment more or less attractive, such as capital requirements.

We started this article with the notion that while we all know what risk is, accounting for risk is far from a perfect science.  Books on topics ranging from market and stock specific risk, to currency, interest rate and political risk fill libraries. This article is not intended to advance the discussion on these important matters, rather it is an effort to provide foundation trustees with a first step in understanding a vital question Is our foundation getting the most bang for it’s buck?