Mandated Five Percent is a Floor Not a Ceiling

Most people in the philanthropic world are familiar with the 5% payout requirement that nonprofits must observe to maintain their tax exempt status.  Therefor, it’s quite natural to assume that foundations take the 5% rate as scripture and rarely deviate from it.  The filings of some of the largest foundations – Ford, Lilly, MacArthur to name a few – show that they steer close to 5%, which would seem to confirm the prescribed rate as the industry standard.  Most foundation observers would allow that a few foundations, notably Gates, which puts out about 12% of assets each year, might skew the numbers upward, but a 5% payout rate should be about right.  For many, this might have been the end of the discussion, however, looking at the the numbers tells a different story.  While it is true that most foundations stick close to 5%, in aggregate, they pay out a far higher proportion of their assets.  In fact, foundations have averaged a little over 8% of their 3 year average assets over the past decade, including throughout the financial crisis of 2008

At first glance, it may seem contradictory both to say that most foundations pay out 5%, and foundations overall pay out 8% of 3 year average assets, so how does one reconcile the difference?

The chart below illustrates the hypothetical amount of giving foundations would have made if they paid out 5% of average assets (beginning of year and end of year).  In isolation, the chart seems to make intuitive sense. One can see the effects of the financial crisis in 2008-2010, and the subsequent recovery as markets (and giving alongside it) increased over the following years.

But, when we tried to reconcile the 5% rate with other data sources, there was a large and consistent difference.  As seen in the chart below, Giving USA, which tracks philanthropic support nationally, and FoundationMark which sources data from over 45,000 foundations from the bottom up, found that giving was substantially more than 5%.  In fact, Giving USA and FoundationMark, both reported giving about 50% higher than the 5% mandate. 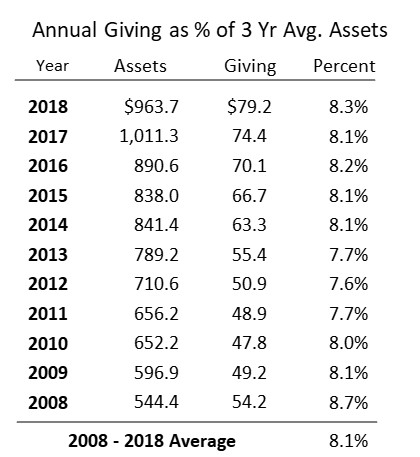 Payout rates can vary across foundations for example some foundations receive significant incoming contributions which they may pay out in the same year, resulting in payout rates up to and over 100%.  Similarly, other foundations might be winding down and would have high payout ratios as well. On the other hand, new foundations may take a few years to ramp up giving and report very low payout rates.  The point, however, is that in aggregate, the total giving rate gas been very consistent at just over 8% on 3 year average assets, significantly higher than the 5% mandate.

This information can be useful fore forecasting foundation giving and the associated budgeting for operating nonprofits.