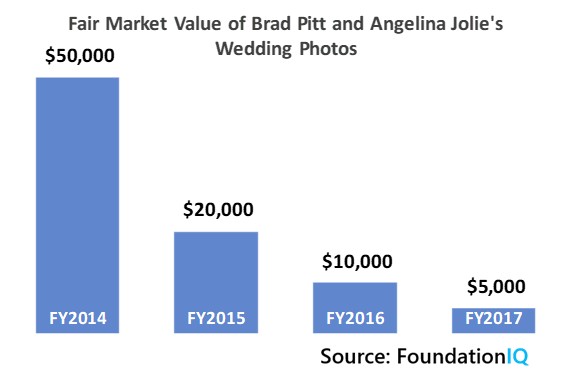 Although Angelina Jolie and Brad Pitt established their foundation several years before they got married in 2014, it was only in that year’s tax form that an unusual item appeared on their list of assets (click here to see source document or page 23 for mobile devices).   While this assets is merely described as “Wedding Photos”, we made the intuitive leap that it’s photos of their wedding.

We aren’t sure what the tax implications ar or how they ended up in the foundation as a listed asset, but it was sad to see the value of their wedding photos show a similar trend as their marriage  here

By the way, while the foundation is still called the Jolie-Pitt Foundation, and they are both still trustees, it seems that Angelina is providing all the money these days.