While it won’t be official until we see the IRS filings later this year, it is safe to assume that the Lilly Endowment surpassed the Ford Foundation in total assets in 2018 (and by a considerable amount).  We estimate that Lilly finished 2018 at about $15 billion, while even if Ford posts heroic 2018 results of 10% (all major stock indices were negative, bonds were flat, but private equity was up 10% as measured by Cambridge Associates), it wouldn’t be enough to keep pace with Lilly.  Of course there isn’t much mystery surrounding Lilly’s incredible performance, the foundation is virtually all in Eli Lilly (NYSE:LLY) shares, which were up 36% in 2018, (the S&P 500 was down 4.4% for the year), and early results show most foundations were in negative territory.

For the sake of the graph below, we kept Ford’s assets at $13.8 billion reflecting a hypothetical 5% return offsetting the required payout ratio.  Again, we can’t emphasize enough that we won’t have exact numbers for either until we get their filings, but the overwhelming likelihood is that Lilly has moved up a notch. 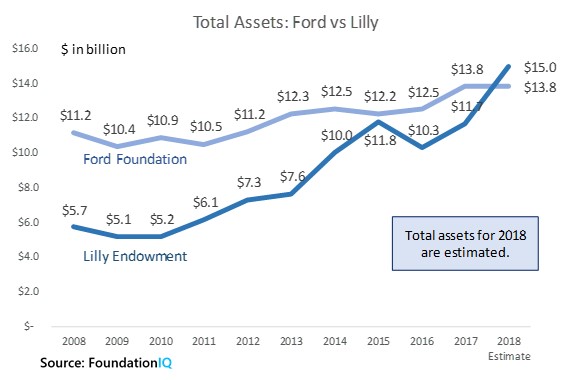 Ford changed its fiscal year in 2012, so prior years reflect a September 30th year end.

Historically, Ford was the largest foundation in the world until Bill Gates and Warren Buffett arrived on the scene knocking Ford to second place where it has been for over a decade, but now will have to settle for third place (at least for the time being).  Ford’s investment performance has been good overall. FoundationMark rated Ford’s 5 year performance at 4 stars.  Lilly’s performance, however has been extremely strong. (See details at FoundationMark 15 for Lilly and Ford. ).

Readers should know that Ford divested of its Ford Motor Company shares many years ago and runs a diversified multi-asset class portfolio versus the very definition of a concentrated portfolio at Lilly.  One can easily see that Lilly’s performance has been volatile, jumping from $7.6 billion in 2013 to $11.8 billion in 2015, before falling back to $10.3 billion in 2016, but the volatility accompanied very strong performance.

But Will Lilly Stay In Second? 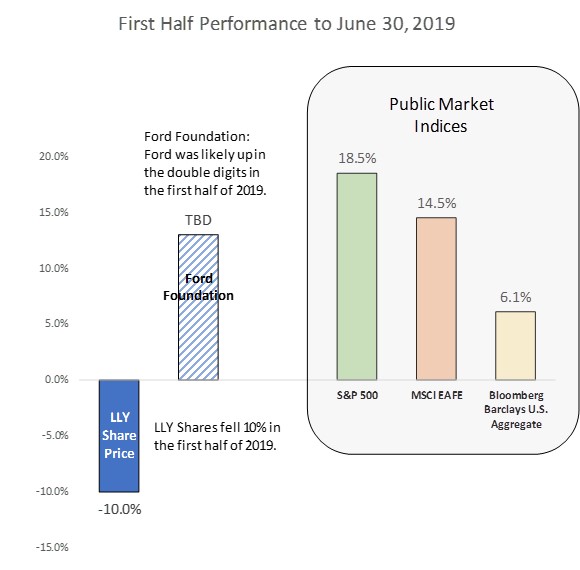 In the first half of 2019, Lilly shares dropped about 10% while the global stock markets were very strong with the S&P 500 up 18.5% and developed international markets (as measured by the MSCI EAFE Index) weren’t far behind, gaining 14.5%. Even bonds had a strong first half with the Bloomberg Barclays U.S. Aggregate Index ahead 6.1%. Assuming Ford’s portfolio has a meaningful correlation to these market indices (as it has in the past), the 2019 race for second might be neck and neck.